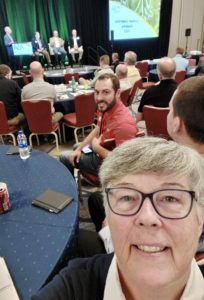 Maryland farmers Belinda Burrier of Union Bridge and Shane King of Princess Anne took a trip to the Sunshine State to attend the American Soybean Association’s (ASA) Soybean Leadership Academy earlier this month. The two joined more than 100 other grower leaders and staff in Bonita Springs, Florida to take part in the two-day training, designed to provide tools and techniques that enable state and national soybean board and association leaders to be more effective, efficient, and inspired leaders. Throughout the program, participants had the opportunity to engage with speakers and each other.

“As a first-time attendee of the Soybean Leadership Conference, I really enjoyed myself and learned a lot from the various speakers,” remarked King. “I value and applaud the effort and time that the ASA puts into training farmers and leaders in our industry.  It was great meeting new people and discussing the future of the soybean industry.”

“I always enjoy attending the Soybean Leadership Academy,” said Burrier. “We get to meet farmers who want to expand their knowledge base and learn about new issues on the horizon for our industry. It’s a good way to mentor the next generation of farmer and network with likeminded people.”

In Maryland, farmers grow about a half a million acres of soybeans, producing more than 20 million bushels of beans each year. With a value of $173 million to the state’s economy, soybeans are one of Maryland’s top crops. The checkoff program is funded by farmers through an assessment of one-half of one percent of the net market value of their soybeans at the first point of sale. One-half of the checkoff funds stay in Maryland for programs; the other half is sent to the United Soybean Board.

For more information on the Maryland Soybean Board, visit www.mdsoy.com.