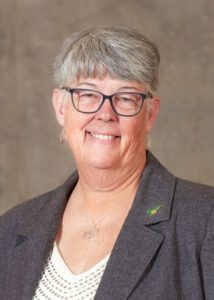 Belinda Burrier to serve as Chairman of new USB Communication and Education Committee.

The Maryland Soybean Board congratulates farmer Belinda Burrier of Union Bridge, MD after she was reelected to the United Soybean Board (USB) Executive Committee last month. This year, 2022, will mark Burrier’s eighth year serving as Maryland’s representative to the United Soybean Board, and her third year serving on their Executive Committee. This year, she will serve in the new position of Communications and Education Chairman under the USB’s recently adopted strategic plan update.

“As Chair of the new Communication and Education Committee, I want the soybean farmers to know we will be working to boost U.S. soy’s reputation throughout the value chain,” says Burrier. “We will be sending positive materials to media outlets and building up our industry as a leader in conservation and stewardship for the land.”

Burrier is one of eleven farmer-leaders who were recently elected by 78 volunteer farmer-leaders of the soy checkoff at the USB Meeting December 7-9 in St. Charles, MO. Other members of the newly elected USB Executive Committee include: Chair Ralph Lott of New York, Vice Chair Meagan Kaiser of Missouri, Secretary Ed Lammers of Nebraska, Treasurer Steve Reinhard of Ohio, Tom Oswald of Iowa, Philip Good of Mississippi, Kevin Wilson of Indiana, Gary Berg of Illinois, Matt Gast of North Dakota, and Ex Officio Dan Farney of Illinois. Burrier and Lott are the first two individuals from the East Coast to serve on the USB Executive Committee.

The mission of the soy checkoff is to create value for U.S. soybean farmers by investing in research, education, and promotion of U.S. soybeans. Research and promotion projects are implemented by USB with oversight from USDA Agricultural Marketing Service.

Since 1991, when the soy checkoff began working on behalf of U.S. soybean farmers, it has provided significant return on investment by leveraging partnerships that increase the value and preference for U.S. soybeans. The latest mandatory five-year independent economic evaluation, conducted in 2019, found that U.S. soybean farmers received an estimated $12.34 in added value for every dollar they invested in the checkoff.

In Maryland, farmers grow about a half a million acres of soybeans, producing more than 20 million bushels of beans each year. With a value of $173 million to the state’s economy, soybeans are one of Maryland’s top crops. The checkoff program is funded by farmers through an assessment of one-half of one percent of the net market value of their soybeans at the first point of sale. One-half of the checkoff funds stay in Maryland for programs; the other half is sent to the United Soybean Board.